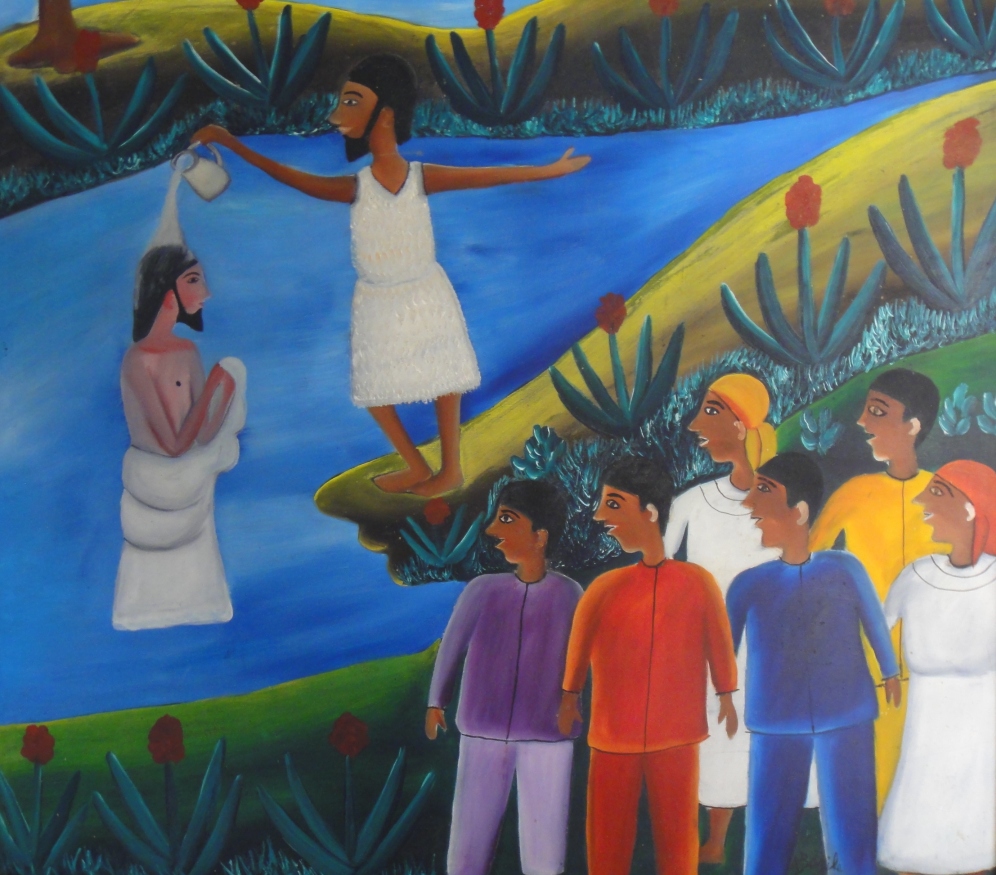 Matthew 3:1-12
In those days John the Baptist appeared in the wilderness of Judea, proclaiming, ‘Repent, for the kingdom of heaven has come near.’ This is the one of whom the prophet Isaiah spoke when he said,‘The voice of one crying out in the wilderness:“Prepare the way of the Lord,
make his paths straight.” ’ Now John wore clothing of camel’s hair with a leather belt around his waist, and his food was locusts and wild honey. Then the people of Jerusalem and all Judea were going out to him, and all the region along the Jordan, and they were baptized by him in the river Jordan, confessing their sins. 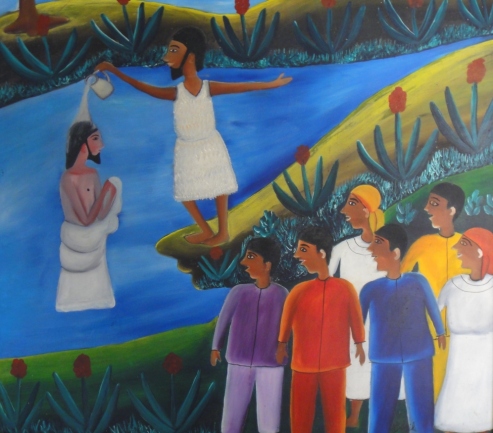 But when he saw many Pharisees and Sadducees coming for baptism, he said to them, ‘You brood of vipers! Who warned you to flee from the wrath to come? Bear fruit worthy of repentance. Do not presume to say to yourselves, “We have Abraham as our ancestor”; for I tell you, God is able from these stones to raise up children to Abraham. Even now the axe is lying at the root of the trees; every tree therefore that does not bear good fruit is cut down and thrown into the fire.
‘I baptize you with water for repentance, but one who is more powerful than I is coming after me; I am not worthy to carry his sandals. He will baptize you with the Holy Spirit and fire. His winnowing-fork is in his hand, and he will clear his threshing-floor and will gather his wheat into the granary; but the chaff he will burn with unquenchable fire.’

The violent language of wrath and destruction in this text is kind of surprising and off-putting. Unquenchable fire and axes are not themes we usually associate with our God of love. Less so during Advent. During Advent, the secular world is usually already in full-blown Christmas mode, and we – in our quiet Christian way – are preparing ourselves for the birth of sweet little baby Jesus.

What is John even so mad about in this text anyway? He’s hanging out in the wilderness, baptizing the huge crowds of people that are coming to him from every which way. I mean, he’s baptizing everybody. Why is it so shocking and upsetting then that the Pharisees and Sadducees are among the crowd as well? Why are they singled out and separated as being somehow worse or more sinful than the rest?

John’s ministry challenged that authority and their tradition, so it’s no wonder that they were a little curious to see what he was up to. John practiced baptism, which was not really a Jewish thing. He forgave sins with an authority that the Pharisees and Sadducees did not recognize. And he preached that God was doing a new thing – that the One was coming, the Messiah for whom they had waited – but the Pharisees and Sadducees did not yet accept or embrace that message. Surely, they thought, as the religious leaders of the community, if the Messiah had really come, they would have been the first ones to know about it. After all, they had Abraham as their ancestor; no doubt the prophecy would be fulfilled through them.

So when they came down to the river to see what all the fuss was about, they didn’t come with open hearts ready to repent and prepare the way of the Lord the way that the crowds of people did. They came with hearts that were guarded and ears that were closed to hearing the new message that John was preaching. They came with suspicion and kept their distance. This attitude is what really got John’s camel-hair tunic in a twist.

Because of the faith that the Pharisees and Sadducees placed in their own spiritual pedigree, they were skeptical about divine truth coming from any other source, and so they missed the truth in John’s words. They had been waiting for God to do a new thing, but when it actually started to happen, they just couldn’t see it.*

As we observe the season of Advent, and wait with anticipation for the new things of God to come, I can’t help but wonder how we as a church, as the ELCA, might read ourselves into this story. Are we modern-day Johns, boldly preaching that the kingdom of God has drawn near? Or are we more like the Pharisees and Sadducees, religious officials preoccupied with maintaining our traditions and not always able to see where God is doing new things in the world?

Well, we may not like it very much, but I think that we, as the institutional body of the church, have a tendency to slip into being the latter. Without a doubt, there are a number of prophetic leaders among us, whose John-like voices stand out like stars in the night. But these voices are often overshadowed by concerns about self-preservation. For at least the last decade, much of the church’s public conversation has been full of fear about how much longer our institutional model of church will be able to survive. Our pews are emptying, our numbers are shrinking, and we wonder with fear and trembling about what the future will hold for this traditional, liturgical, confessional church that we love. Sadly this fear chokes our ability to be the prophetic voice the world needs. We struggle to see where God is bringing new things to life in the world while we are so busy trying to resuscitate the things that have given us life in the past.

In fact, we’re so worried about the decline of the church in North America that it has all but blinded us to one startling fact; and that is that, globally, the church is exploding with life and vitality, growing at a tremendous rate in Asia, Africa, and Latin America. God’s spirit is alive and moving in the world, calling people out to the wildernesses of the so-called “global south.” And people are turning out in droves, coming down to be baptized in the river Jordan, which in our day has become the Nile River, the Amazon, the Ganges, and the Rio Grande.

God is indeed at work in the world, doing new and wondrous and unexpected things. God is bringing life into desert places that have known poverty and violence and discrimination. Through the waters of baptism, God gives a new identity to the “untouchable” people, the Dalits of India, saying to them: “You are a royal priesthood, and my chosen people.” Through the bread and the wine offered freely to all, God says to undocumented migrants and refugees: “You are welcome here at this table. Come and eat.” And through the sharing of the living Word, God invites people everywhere whose stories have been erased to be part of the grand witness of salvation and hope.

Multitudes of people around the globe are receiving this Word with joy. And in their celebration, they themselves give new life to ancient stories, bringing Word and Sacrament into their own spiritual and cultural contexts, producing rich new language and song and prayer and practice in worship of our God.

The traditions of these churches do not necessarily look like the traditions that we are used to in Euro-American churches, and like the Pharisees and Sadducees, we can sometimes feel skeptical about this difference, or even threatened. We have carefully preserved and cultivated our ecclesial and liturgical traditions over several centuries, and it is a challenge for us to adapt to or include new theological understandings and liturgical practices. It’s a challenge for us to accept that the new life we pray God will breathe into the church may not look anything like the church life we are used to at all.

And so, we may come down to the river to see what all the fuss is about, but our hearts are guarded. We may dip our toes into the wild, vibrant spirituality of our global brothers and sisters, but we don’t yet have the courage to jump in. We’ll borrow bits and pieces – a song here, a prayer there – and thoughtfully layer them into the ELW, but we spend almost no time at all talking about or trying to understand the deep and meaningful spiritual and cultural contexts that produced these things. In fact, we usually sideline those kinds of studies as “contextual theology”; treating them as a somehow lesser alternative to our own Euro-centric tradition. We may approach so-called “contextual theologies” with good intentions, but we do not come with open hearts.

If we really want to see the new things that God is doing in the world, if we want to see where and how the kingdom of heaven is already coming near, then it is time for us to step outside of our comfort zone, to loosen our grip on the structures and traditions of the church as we know it. It is time for us to listen and to learn from the voices calling to us from the wildernesses of the global south – and to the minority voices calling to us from the midst of our own church – to repent and prepare the way of the Lord.

*I am sensitive to the fact that some parts of this sermon could be interpreted as anti-Semitic, and I want to make clear that that was NOT my intention. I apologize for any offense I may have given.

2 thoughts on “Brooding on Vipers: An Out of Season Advent Sermon”