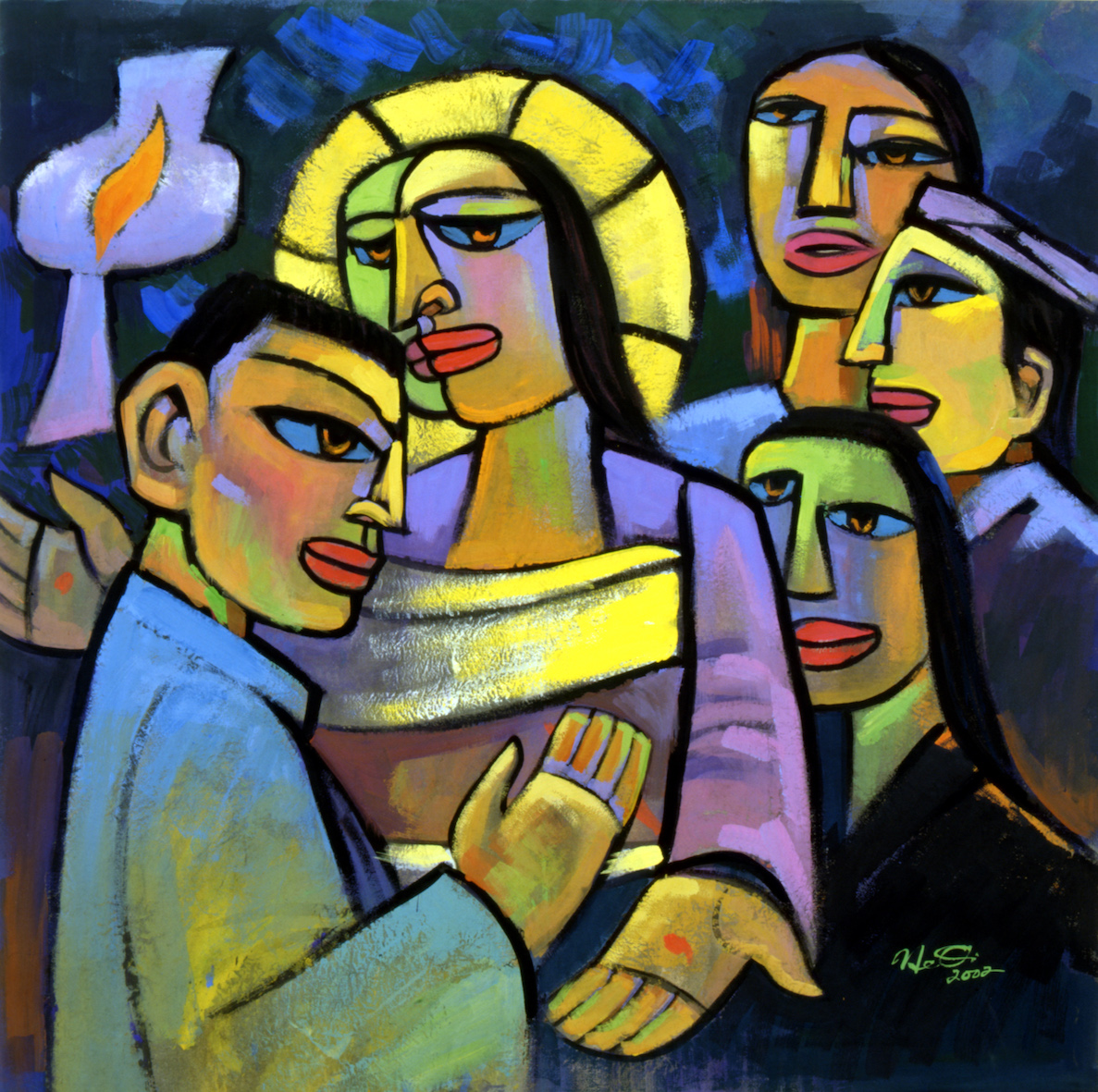 Thomas is in the wrong place at the wrong time in our gospel reading for this morning.  Or, at least, he’s not in the right place at the right time. The rest of the disciples had gathered in fear following Jesus’ crucifixion, probably to talk about the rumors they had heard that Jesus had somehow risen from the dead – when Jesus himself suddenly appears among them!  Only Thomas isn’t there to join in the rejoicing or to hear Jesus speak peace to them.

We have no idea what Thomas was off doing, but we do know that when he came back, he definitely did not expect to hear that everyone else had gotten to see Jesus while he was out.  Thomas reacts to this news with disbelief – and he flat out refuses to believe the testimony of the other disciples. Instead, he insists that he will only believe if he sees Jesus with his own eyes and touches his wounds with his own hands.

Thomas’s lack of faith is troubling.  I mean, he was there when Jesus raised Lazarus from the dead, and he had heard Jesus foretell his own death and resurrection.  So this news shouldn’t have come as a complete shock to him.  But even more troubling than this is Thomas’s lack of faith in the witness of his fellow apostles.  By this point, he had heard the news of Jesus’ resurrection from Mary Magdalene and the other women, from Simon Peter, and now from the whole group of the disciples.  These were people in whom Thomas should have trusted, but he still refused to believe. It’s no wonder then that Thomas so often gets a bad rap in the church as “Doubting Thomas.”  As Christians living millennia after Christ died and rose from the dead, the primary foundation of our faith is built on the witness of all the people who came before us.  And so Thomas’s rejection of that witness naturally makes us a tad uncomfortable!

On the other hand, this scene with Thomas fits well into how he is portrayed all throughout the gospel of John.  Thomas shows up consistently as a very pragmatic person who says the things that everyone else is just too afraid to say.  After all, when Mary Magdalene came running back to tell Simon Peter that she had seen Jesus, what’s the first thing he did?  That’s right – he ran to see for himself.  Thomas was asking for what everyone else had already received – a chance to see Jesus for himself.

And it’s also possible that Thomas’s reaction to the news was shaped by grief.  He had loved Jesus just like the rest of them, and he had shown that he was even willing to lay down his life for Jesus.  So it’s easy to imagine that the news that Jesus was alive again must have seemed too good to be true.  Thomas wanted to be sure it really was true before he dared to risk hoping.

So Thomas doubted.  And he became known as “Doubting Thomas.”  And we say that like it’s a really bad thing. But if you read the story more closely, you notice that Jesus’s reaction to Thomas’s doubt doesn’t really bear that out. Jesus never gives Thomas crap for doubting.  In fact, when he comes back, the first words he says after “Peace be with you” are directly to Thomas – he immediately holds out his hands and invites Thomas to touch him. Jesus understands that resurrection from the dead isn’t really part of the normal scope of human experience, and he understands Thomas’s doubt as a reasonable response.  He reassures Thomas that he really is risen, and he reminds him again that the scope of God’s power goes far beyond human understanding:  “Blessed are those who have not seen and yet have come to believe.”

With God, there is always space left for doubt; because most humans – including us – are among those who have not seen, and because God works in ways that are beyond our understanding.  Doubt is an inescapable part of faith.  But I don’t think that’s necessarily a bad thing – because at the end of the day, without doubt, faith couldn’t really exist.  If we were absolutely, 100% certain of God and understood exactly how God works, well, that would be knowledge, and not faith.  And that would also mean reducing God down to something human, instead of something cosmic and divine.  On the other hand, doubt leaves the door open for mystery and wonder. Doubt is like a prayer reaching out, asking that we too be allowed to touch God with our own hands.

For that reason, acknowledging doubt can actually be a sign of faith in and of itself.  When we doubt and ask hard questions about our faith, we are showing trust in God’s faithfulness; we are showing trust that God is strong enough to withstand our doubts and questions.  And we are opening the door for ourselves to be mystified and awed by God all over again.

To be clear, I’m not saying that we should all dig in our heels and refuse to believe until we get to stick our own fingers in Jesus’ wounds; I mean, for starters, we’ve got to be pragmatic – it’s been 2,000 years since those particular wounds were made, and like, Bandaids have been invented since then.  What I am saying is that questioning and doubt can be opportunities for our faith to grow.  I’m sure that Thomas’s doubt helped his faith to grow.  And questioning and doubt have certainly been part of my own faith journey – heck, it’s a big part of seminary education.  We’re taught to think critically about our faith, to question beliefs we’ve always taken for granted, and to take our hard questions to God in prayer.  It can be uncomfortable to feel like your faith is being deconstructed and pulled apart like that – but it helps us develop a higher tolerance for ambiguity and mystery, and in the end, it makes our faith all the stronger.

Thinking we have all the answers or that we understand how God operates is the kind of stuff that chokes the life out of faith.  Absolute certainty leaves us nowhere to grow.  Instead, doubt is an invitation for us to draw closer to God and for God to draw closer to us.  It’s an invitation to get to know God ever more deeply and to grow stronger in relationship with God.

Blessed are those who have not seen and yet have come to believe – and blessed too are the doubts that help us to grow deeper in faith until we too cry out, “My Lord and my God!”

4 thoughts on “Sermon: When in Doubt”