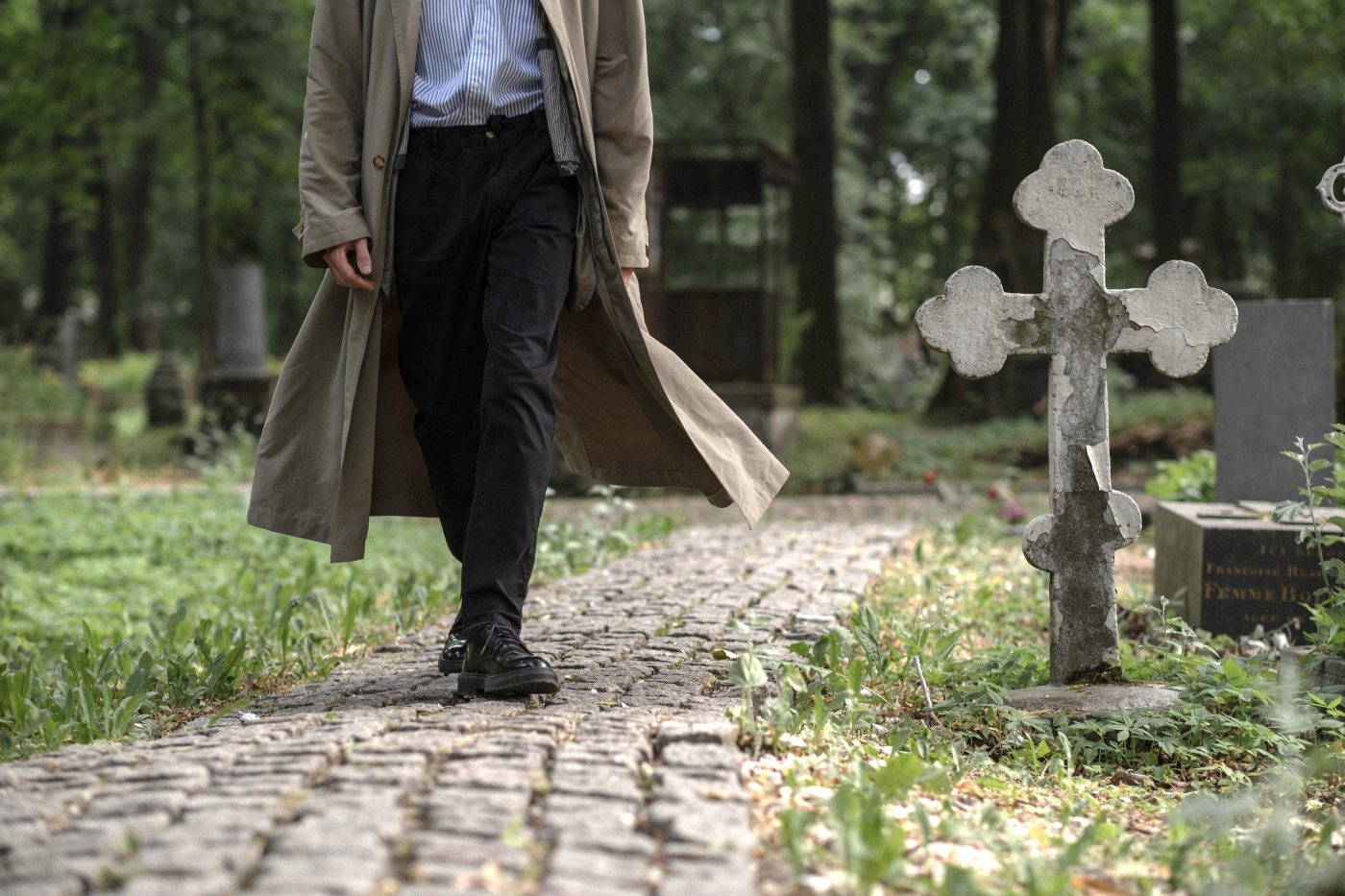 Our gospel reading for this morning brings us one of the greatest and best known stories from the life of Jesus: the healing of this man with the legion of demons.  Or – as our bishop-elect pointed out at text study this last Tuesday – you could also read this story as the biblical origin of deviled ham.

It’s a story with a lot of layers.  Jesus and his disciples have just sailed across the Sea of Galilee – through a storm, which Jesus calmed – and they’ve landed on the opposite side, in the country of the Gerasenes.  As they head toward the city, they walk by a cemetery, where they suddenly encounter a man tormented by demons, who lives chained up in the cemetery.  Jesus immediately goes to heal the man and – after some brief negotiations with the demons – he allows the demons to possess a herd of pigs, which immediately run into the sea and drown.  Super weird story so far.  But it gets weirder.

The people whose ham just got deviled run back to the city and tell everyone what happened.  And then the people of the city run out to see for themselves – “and when they came to Jesus, they found the man from whom the demons had gone sitting at the feet of Jesus, clothed and in his right mind. And they became frightened.”  It’s not the demons, or the snapped chains, or even the possessed pigs – it’s seeing this man healed and clothed and in his right mind that really freaks them out.  It’s only after Jesus frees this man from his demons that the people become afraid.

Why?  Why is it only after this man’s liberation that the rest of the community suddenly becomes afraid?  What do you think?

It could be that these folks are frightened by the power that Jesus displays – or perhaps they might even think that Jesus must be in league with the demons himself since he can order them around like that.

But I suspect that it might also be that Jesus’ act of healing and liberation has brought to light one of the community’s dirty little secrets that no one wants to talk about.  Namely, he’s highlighted the situation of this sick and suffering man living alone on the outside of town.  It’s possible that the people of the community had tried to help him at one time.  But their ultimate solution was to give up on him and to leave him chained and naked and alone – literally living among the dead – out of sight and out of mind.  It’s a wound festering in the heart of the community that they have been trying very hard to ignore.

But Jesus knows there can be no healing or liberation or wholeness if you aren’t willing to own up to what is broken.

It reminds me of something that is still kind of hard for me to talk about.  And that is that I used to be a smoker.  I was never a heavy, like pack-or-two-a-day smoker; but it’s a habit I picked up when I was living in the Dominican Republic and I kept it up regularly for about a decade.  I felt a lot of shame about it.  Some of the shame was a holdover from being a vocal music major – imagining the disapproving faces of my professors – but a lot of it came from knowing I already had an elevated risk and family history of cancer.  So I went to great lengths to hide my smoking habit from other people – I think I may have single-handedly kept Febreze in business (lol).  And to this day it’s something not a ton of people know about me.

The only way I finally managed to quit smoking was to finally share my dirty little secret with someone else; I told a handful of trusted friends who helped keep me accountable and who reminded me why it was so important to quit.  I had tried quitting on my own several times before.  I knew objectively that quitting would be a good thing, much better for my health.  But I had come to rely on it as a coping mechanism for dealing with stress and anxiety.  I knew I should quit – but I was afraid of the change and the loss that would come with quitting, so I kept finding myself going right back to it.

Thinking about my struggles with quitting smoking makes me wonder about the people in our gospel reading: what kind of change or loss might they have been afraid of?

There’s a layer to this story that’s kind of lost on 21st century readers – but it would have been immediately obvious to the people for whom Luke was writing – and that is the deep political dimensions of this story.  To our ears, language like “Son of the Most High God” doesn’t sound political – it just sounds religious – but to people living under Roman rule in the first century, the title “Son of the Most High God” was explicitly reserved for Caesar, the emperor.  Even the name of the demons is significant: we think of “Legion” as just being a whole lot of something, but “Legion” was also a specific Roman military term for divisions of over 5,000 men.  So the deeper implication of this story is that Jesus is the real emperor, not Caesar, and he is powerful enough to defeat an entire legion of soldiers with just a few words.

So instead of celebrating this act of liberation, the people freak out and ask Jesus to leave.  They have chosen to accept a life under Roman rule that low-key kind of sucks for them – they have chosen to flat out ignore the suffering that this way of life has caused another member of their community – because they’re too afraid to challenge the powers that be.  Fear keeps them from imagining the world that Jesus is calling into being – the vision of a world made right.

As I reflect on this gospel text, I am also mindful of the fact that today is Juneteenth – another day of liberation that is certainly worth celebrating!  Today is the day we celebrate the ending of slavery in the US, in 1865.  I am curious, though: How many of you heard of Juneteenth for the first time just in the last few years? (…Or just in the last few minutes?)

It’s strange.  Juneteenth has been celebrated since 1866 – but it wasn’t declared a federal holiday until 2021.  How is that possible??  Why would we not make a bigger deal out of celebrating the end of something as horrible as slavery??

I suspect it’s because the history and legacy of slavery have become our nation’s own dirty little secret – it’s the man chained up in the graveyard that we don’t want to talk about.  Just the mention of it is often enough to make us uncomfortable.  And I get that.  It hurts to remember that people who looked like us once fought to be able to keep other people enslaved – and that some of them might even be our ancestors.  And it hurts to be reminded of the ways that discrimination against people of color is still baked into the economic and political systems of this country – reflected in differing access to things like housing, healthcare, employment, and education.  It’s hard for us to hear about these things without feeling like we’re being unfairly blamed, or accused of being racist ourselves.

After all, we don’t carry that kind of hatred or malice in our hearts!  I mean, I’m your pastor and I know you; I know your good hearts.  Now, that being said, do we all carry our own set of biases and prejudices (often unconsciously)?  Absolutely.  And should we be working on recognizing and changing those biases?  Of course!  But we also need to recognize that our individual attitudes are not the real issue.  The real struggle we face is much larger than our individual lives or actions: it’s that, regardless of whether we want to or not – regardless of whether we are even aware of it or not – we all participate in systems that have been deliberately set up to favor some groups of people and to marginalize others.

The thought of trying to change those systems – even if it’s objectively for the better – can be overwhelming.  We can easily feel hopeless, wondering what kind of difference we as individuals can even make.  And, like the people in our gospel reading, we might feel fearful about what kind of change or loss that liberation might mean for us.  As those people discovered, sometimes the liberation God brings doesn’t feel to us like liberation.  Sometimes we love the chains that bind us, even when they make us live with demons or cause damage to our lung tissue or keep us divided us from our neighbor.

But the good news is that God’s liberation brings us to new life, even when it’s hard – and even when our hearts resist it.  I finally made it through the hard process of quitting smoking and now I’m going on four years completely smoke-free! I can breathe better and sing better, and I even have hope of living longer.

God is not content to leave us living in our narrow ideas of what is acceptable or what is possible.  God’s imagination of how this world could be is much larger and better than ours is.  God’s imagination of how we could be is much greater and better than what we think of ourselves.  And God invites us to step into that expansive vision of the future – to let go of our secrets and our shames – to leave behind the chains of our fear, and to follow freely wherever Christ may lead us.